We won at the Symphony Hackathon! 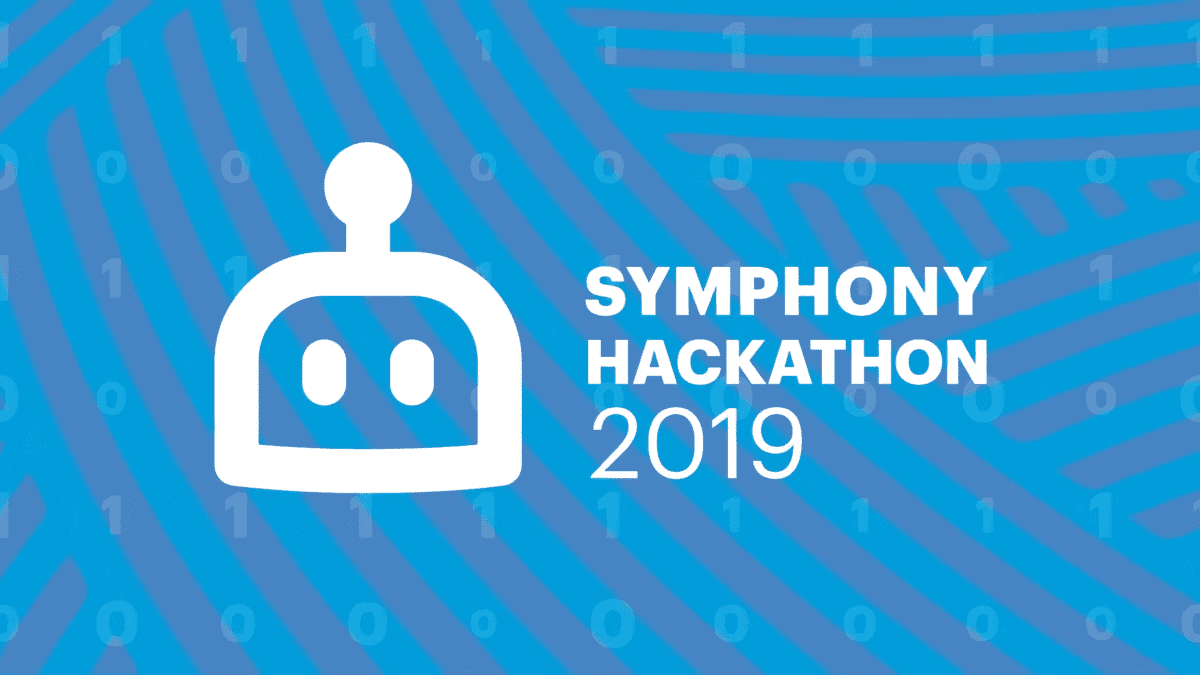 If there’s something we love doing at Reason, it’s working out a solution at speed and being able to see our first iteration in action so we can learn and improve. When we get to do this in a competitive environment, with some of the brightest software engineering minds in the UK, and we WIN; that’s an extra bonus.

We got the chance to do just that at the Symphony hackathon at Credit Suisse’s London office on 12 September. The competing teams were tasked to develop extensions to solve critical workflows using the platform. They should be scalable, innovative solutions that break down silos across firms, as well as internally across front, middle, and back offices. As an added incentive, the winning solutions will also be featured at the Symphony Innovate conference on 3 October in New York. The 15 competing teams from banks, communication and fintech companies were judged on innovation, workflow, and potential business impact.

We’re honoured to have been chosen as one of the two winners!

What was our inspiration?

Symphony has recently released Symphony Elements, which enables greater interactivity in chat messages. We wanted to showcase this new capability.

We’d seen employee engagement tools before and have tried a few of our own ideas internally at Reason. Symphony’s communication platform and customisability (especially the new Symphony Elements) were ideal as source material for such a tool.

What was the problem we were aiming to solve?

Issues that slow projects down can be lost or forgotten if the feedback process happens after the project is complete. Instant and on-going feedback gathering and sentiment analysis that processes hundreds of conversations make it easier to prompt reassessment as it’s needed. Other common issues include extracting genuine critique and providing an anonymous method for reporting concerns.

Enter sentiment analysis. Messages from the normal use of a chat channel can be analysed to determine an overall sentiment and the feedback of each participant. A few googles later, the AWS Comprehend API came to light as the quickest way to integrate all this.

But raw data is hard to read! No problemo, one of Reason’s amazing designers had created some UI designs that could be used to skin the solution on the day. Combine that with a repurposing of Symphony’s existing Yeoman generator to create an example Node.js bot, extension app and database, and we had a common repo for the team to work from, certificated and config- ready for the hackathon environment. 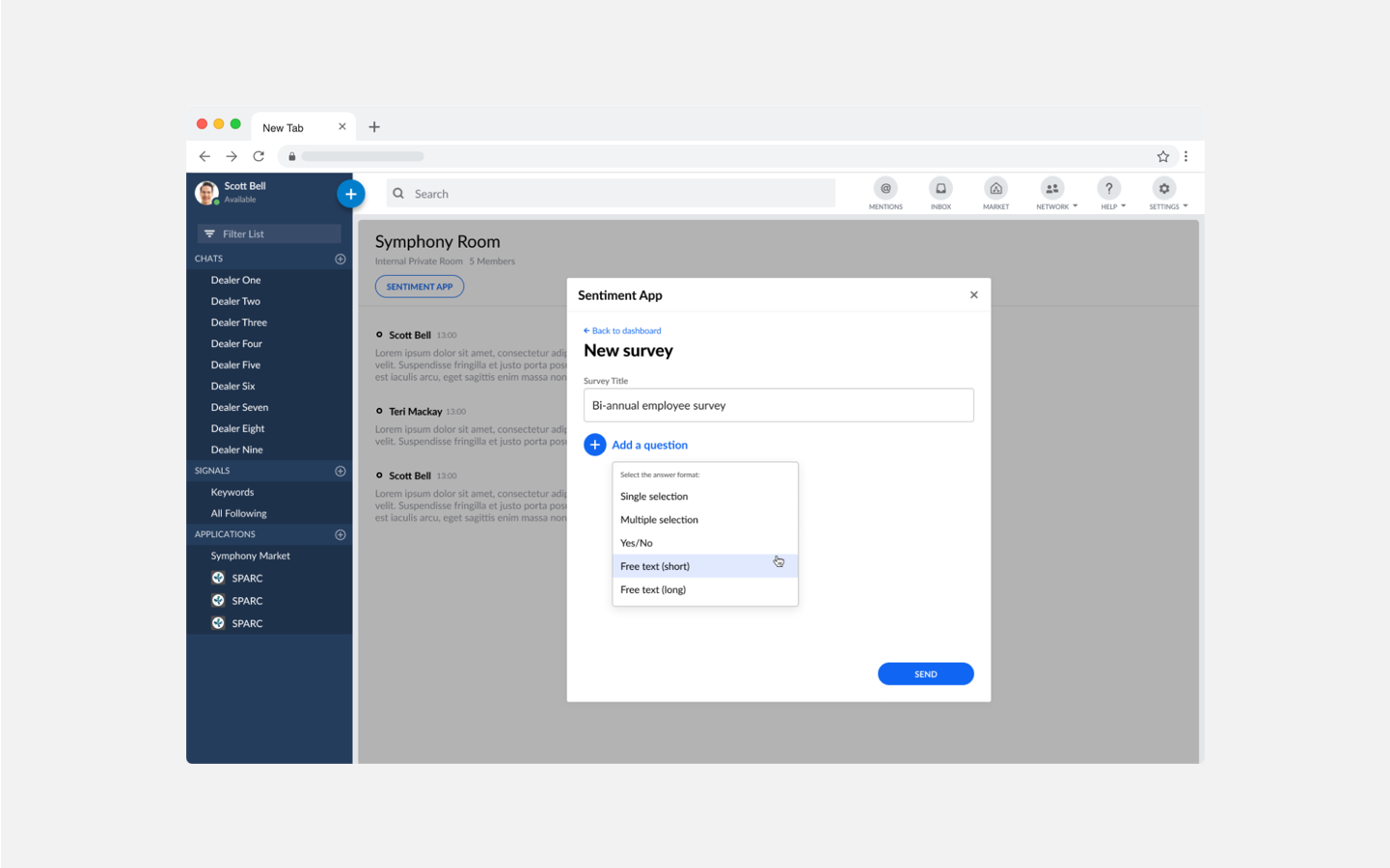 Now we were fully armed!

What does it do?

The core functionality is a survey tool coupled with an overview of the positive/negative sentiment in the room. For the hackathon we only made one survey form and report, but a full version of the solution would include a full survey builder. Once all the responses are in, users generate a PDF report of the outcomes. Symphony Elements made it easy to whip up a user interface for both survey and results, which can be accessed with a simple Symphony Bot. 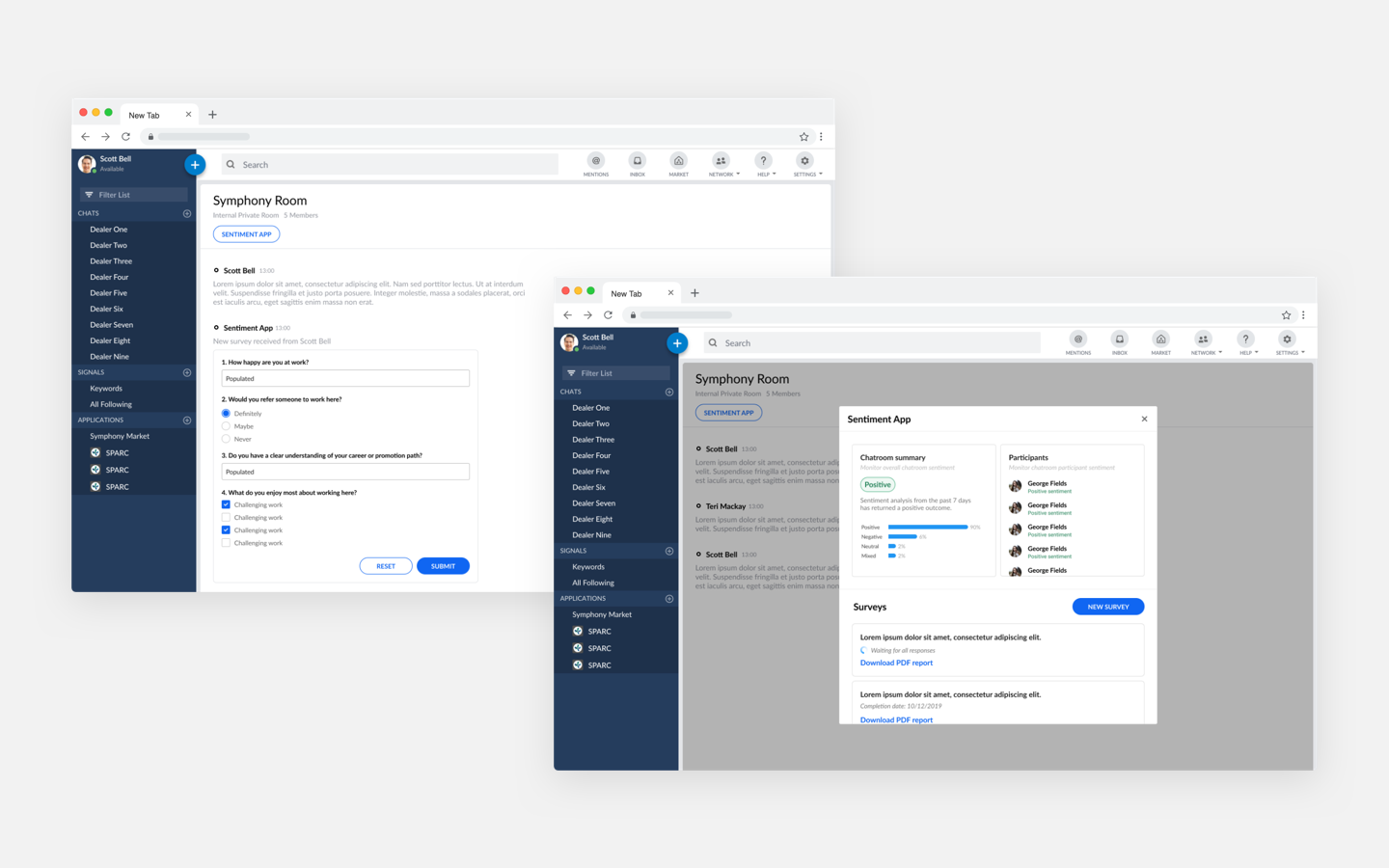 AWS’s existing sentiment analysis platform allowed us to get some sophisticated neuro-linguistic programming (NLP) features into our prototype.

What did others solve?

Why did we win?

At the end of the day, we had five minutes to present to the judges, who were a mix of Symphony headhonchos and financial services leaders. We decided to taunt the live demo gods by not only doing a live demo, but asking everyone in the room to provide the data for it... But we also recorded a video just in case. We believe this is known as hedging your bets.

Our karma held out - by inviting the other hackathon participants and judges into our Symphony chat room we were able to get lots of responses in the demo survey and the app performed flawlessly.

The extension met the brief by solving a problem that could exist across any part of an organisation, is not specific to one problem, can be used across small and large scales, and can be repurposed for many uses.

We hope to finish up full functionality of the tool and release the extension on the Symphony marketplace... And we’re looking forward to seeing if we win in New York!

What we learned from conducting remote research in a large financial services organisation.

Reason was voted onto the Society of Digital Agencies in early 2019. In August, I attended the AGM...

We look forward to seeing you at the Symphony Innovate conference on 3rd October at Centre415, New...